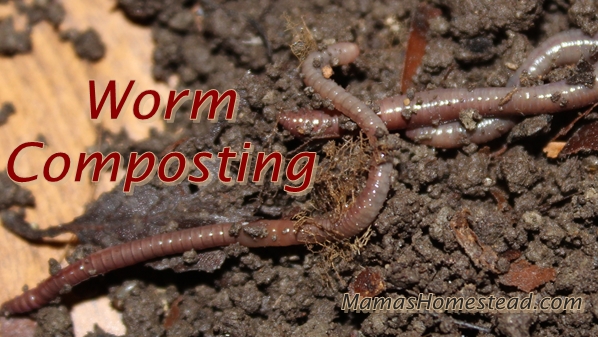 Want a fun project for your kids? Try worm composting!

Vermicomposting is my favorite method of composting, because it is fun for my kids to do. It’s a great way for kids to see worms and microorganisms at work, breaking down organic matter into soil.

Here is a fun book about this called Worms Eat My Garbage: How to Set Up and Maintain a Worm Composting System.

Perfect for small scale, year-round composting, this method is used indoors to avoid temperature extremes. Keep temperatures between 55 and 77 degrees F. We keep ours in our garage or in the basement where it is out of the way and the temperatures remain pretty consistent.

To start, you will need some Red Worms (also called Red Wigglers), kitchen scraps, and a small composting container.

The container can be as simple as a bucket, plastic storage container, or wooden box with small holes drilled in the bottom for ventilation or you can purchase one online. The size of the container you use is dependent on the amount of food waste your family generates. Red Worms can be purchased from an online source, your favorite garden catalog, a local bait shop, or dug from your own back yard.

One pound of mature Red Worms (about 800 to 1000 worms) can eat about ½ pound of organic matter in a day, turning it in to rich, black compost called castings (worm poo). It only takes about 3-4 months before you can start to harvest the castings and use them for potting soil or food for existing house or garden plants.

How to start a worm composting bin:

Start with a loose layer of moist “bedding” in the bottom of the bin. We took newspaper and other paper, dipped it in a bucket of water, and wrung it out until no more water would come out.

Next, place your worms on the moist paper, spreading them out on the top. Then add some kitchen scraps, a little at a time, being careful not to crush the worms. Red Worms love fruit and vegetable scraps (with the exception of onion and garlic skins and hard vegetable stalks like broccoli), tea bags (remove the staple), coffee grounds (including the paper filter), and egg shells (dried and crushed). No meat or dairy.

Feed your worms once a week. Be careful not to over feed them, or you will end up with a box of rotten, smelly food. If you don’t feed them enough, they will vacate the worm bin in search of food, not fun. Keep an eye on them to see how much they eat. As the worms multiply, they will need more food.

Place a layer of moist paper on top of the food scraps to give the worms a covering. The worms will break down the paper and the kitchen scraps into a beautiful, rich, dark compost.

This method has always worked for us to harvest the worm castings. Pull the finished dark compost (castings) to one side of the bin and place fresh bedding and food scraps in the empty side. Over the next few days, the worms will migrate to the side with the fresh bedding and food. You can then sift the compost, removing any worms, egg sacs, or food particles that are still in the castings.

Worm castings make the best fertilizer! Have fun with this project and study those worms!

Do you vermicompost? What have you learned about red worms? Microorganisms? Share some facts in the comments.